skip to main | skip to sidebar

Rack pack of 85 Topps. Will I pull a Clemens, Mac or Puckett??
You have to watch to find out!
Posted by Jeffrey Wolfe at 11:59 PM 5 comments: 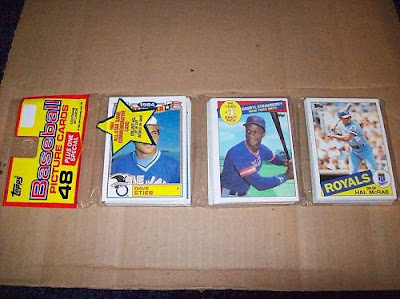 I know I've been away for a LONG time but I have something that is worth the wait. I scooped up a rack pack of '85 Topps for six bucks on the bay. I'll be doing a video break here and also a review for A Pack A Day. Could there be a Clemens or a McGwire rookie lurking inside there? Maybe some Puckett mojo? You'll have to stay tuned to find out...
Posted by Jeffrey Wolfe at 12:40 AM No comments:

Posted by Jeffrey Wolfe at 11:46 PM No comments: 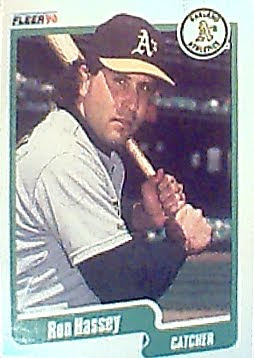 Random Thoughts: Like most of the cards from this set we've seen so far, Ron Hassey was a bench player who benefited from being a member of some great Oakland A's teams of the late 80's and early 90's. Hassey's biggest claim to fame is that he is the only catcher in major league history to catch two perfect games. He was also a pretty effective hitter when given significant playing time and was Bob Welch's personal catcher during his 27 win season of 1990. Hassey also happened to be catching when Dennis Eckersley gave up Kirk Gibson's epic home run in game one of the 1988 World Series.

Hassey first broke in with the Cleveland Indians in 1978. In 1980, he led all catchers with a .318 average and had 8 homers and 65 RBI. The next season he would catch a perfect game by Len Barker against Toronto. Hassey was part of the Indians blockbuster deal that sent himself and Rick Sutcliffe to the Cubs to help in their '84 pennant drive in exchange for Joe Carter and Mel Hall. During that winter he was dealt again, this time to the Yankees where he had his best season hitting .296 with 13 homers in '85. Hassey would spend the next few seasons being traded back and forth from the Yankees and White Sox three times. He would wind up signing with Oakland before the '88 season and would stay there until '91 when he played his last year in the bigs with Montreal. There he would catch Dennis Martinez's perfecto against the Dodgers.

After his playing days, Hassey became the first base coach for the Colorado Rockies from 1993-95 and for the St. Louis Cardinals in '96. From 1997-2003 he served as a scout for the Arizona Diamondbacks. After managing the Carolina Mudcats in '04, Hassey served as bench coach for two seasons under Seattle Mariners manager Mike Hargrove.

The Card Itself: Typical card pose. Not much to see here.

Did You Know?: Hassey managed to lead the AL with 15 passed balls in 1985 despite only appearing in 92 games.

Where Are They Now?: He is currently managing the Jupiter Hammerheads, a single A farm team for the Florida Marlins.

A Goal's a Goal

Sorry I've been away for so long but it's been an awesome summer for me so far. I've been doing everything but baseball cards lately. I'm also getting ready to move at the end of next month so posts may be a bit sparce until I get settled back in. Starting in August I have some really big stuff planned for the blog including loads of vintage junk wax. In the meantime, here's a couple Pirates games I went to last month. Enjoy.
Posted by Jeffrey Wolfe at 2:12 PM No comments: